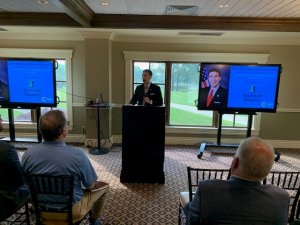 U.S. House of Representatives’ David Kustoff, Republican Representative from TN 8th District, addressed a packed room for a breakfast meeting on May 5 at the Tournament Players Club at Southwind.

The Meeting was sponsored by Southern Security, a premier partner of the Chamber. The company’s president and CEO, Dawn Graeter, introduced Kustoff to the crowd and provided background about the congressman’s achievements, including his tenure as a private practice attorney to his service as U.S. Attorney for West Tennessee (2006 – 2008) and his three terms as a U.S. Congressman, having been first elected in 2016 and re-elected in 2018 and 2020.

According to the Congressman, Biden’s sliding economic approval rating from voters, now at 32%, reflected a growing dissatisfaction with the rising debt of the federal government and rate of inflation as seen in escalating prices of gasoline and food and a rise in mortgage rates. Kustoff pointed to Biden’s decision to halt the Keystone Pipeline as a mistake that has taken the nation from away from a path of energy independence.

Kustoff addressed the border issue by calling attention to the administration’s decision to allow Title 42, (invoked during the Trump Administration as a means of controlling the spread of the covid-19 virus by stricter border policies) to lapse. He cited a growing bipartisan support to maintain Title 42.

Addressing the issue of violent crime, Kustoff focused on the need to support law enforcement as the country faces a massive influx of drugs, specifically fentanyl, citing the growth of illegal drug seizures at the border. 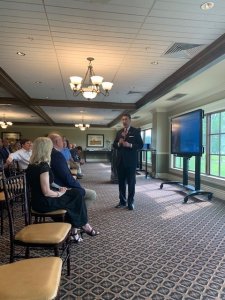 Within the scope of international politics, the congressman cited the current administration’s lack of preparedness prior to Russia’s incursion into Ukraine. He also discussed the “disaster of the withdrawal of troops from Afghanistan.” He did highlight the determination of Ukraine, and Russia’s heavy losses of troops and military equipment. “Russian losses are significant,” he noted. Kustoff also pointed to the threat of an attack of Taiwan by China as a growing issue of concern.

Pointing to the “tremendous opportunities in West Tennessee” coming as a result of the recruitment of new business and major manufacturers, which will bring some 5,800 new jobs into the area, he stated, “Be ready for a population increase.”  Kustoff mentioned the “enormous potential” for the expansion of places to live, restaurants and other services. He described Collierville as a “great model.”

He concluded his prepared remarks with a personal comment: “It’s an honor to do this job.”

Kustoff addressed several questions from the floor, including comments about the border crisis, the need for energy independence, and specific concerns of parents about challenges to their children’s future. At one point, Kustoff surrendered the floor to District Attorney General Amy Weirich, who highlighted the need for recruiting more police officers, the need for better communication with kids, and truth-in-sentencing as ways to address both drug use, violent crime and other challenges facing the community. 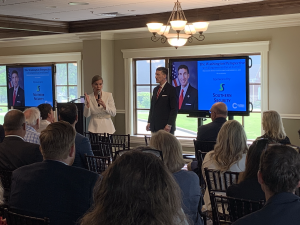